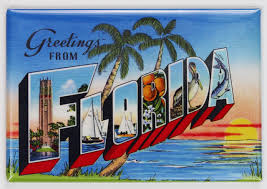 Florida is weird. It is a ramshackle state that has been pieced together into one of the country’s most fascinating regions in less than a century and a half. A place full of passion, artists, movements, poets, musicians, politicians, cognitive scientists, mobsters, sicarios, cartels, writers and a slew of interesting people. Florida is perhaps one of the most ghost-filled spots in the nation because of that. It is the place where Jim Morrison was born, where Carl Hiaasen writes, where Ricky Martin stays, where Versace was murdered, where serial killer Aileen Wuornos stalked, where the Rough Riders invaded Cuba. It is a state full of personality, and a peninsula brimming with specters. Today we are going to discuss, as one of the premier ghost tour agencies in the world, some of the most haunted spots in Florida.

Places where even former president Bill Clinton was made into a believer. And, places where the supernatural isn’t just something that might happen if you really cross your fingers, but something whose occurrence is guaranteed by that county’s Chamber Of Commerce.

The Ten Most Haunted Spots in Florida.

When Bush Jr went and won the elections, way back in 2001, his first order of business was to write a note. That legendary note was addressed to Robert The Doll. It was a simple birthday card wishing the demonic doll a happy 101st Birthday. Why would the President and for that matter thousands of other folks scribble letters to a sailor suit wearing ragdoll? Because Robert is the most famous haunted doll in the world. Robert is said to curse those that badmouth him and even those that take a photograph of him without first asking for permission. Robert inspired Chucky from Child’s Play and is by far one of the most dammed items and effigies on the Planet… This isn’t this humble writer’s opinion by a critical statement flung into the spotlight by one of Robert’s caretaker, Ed Warren.

You can visit Robert at the East Martello Fort in Key West.

Spook Hill is a gravity hill in Lake Wales, Florida. The spot. whose mechanics are still up for debate, adjacent to the Spook Hill Elementary School. The tikes of that institution appropriately adopting Casper the Friendly Ghosts as their Mascot.

The legend of Spook Hill goes that ages ago a great warrior Chief killed a giant demon gator on the site. That epic battle liberated a host of supernatural energies, which in turn changed the dynamics and physical properties of the spot. How did it alter these fundamental forces? Leave your car in neutral on Spook Hill, and it will actually roll upwards defying the laws of gravity.

Located in Ochopee, more to the point within the Everglades National Park, the Loop Road is considered one of the nation’s prettiest and most dangerous scenic roads. What makes this place such a hazard? It is a 20-mile one-lane road that knifes deep into the swamp. A road full of downed trees, hill folks, huge crocodiles, and not a single light.

Those reasons above are why Al Capone choose the tail end of the Loop Road to built his now derelict mansion. He threw huge parties, received bootleggers and rum runners, offed witnesses and rivals in the full knowledge that due to the terrain the police needed at least an hour to reach his mansion from the Tamiami Trail entrance.

Thanks to Capone’s business tactics and his associates, the Loop Road is filled with unmarked graves and dozens of ghosts.

Located in St. Augustine, the oldest continuous town in the US, this old Spanish Fort is a beehive of supernatural activity. Over its almost 500 years of history, the castle has seen all manner of bloodshed. It has been the epicenter of Pirate raids, British Invasions, pandemics and even served as an incarceration camp for Native Americas during the late 19th century. Each of these historical punches has left a supernatural mark on the place’s soul… Marks that stir up in the middle of the night and have a nasty habit of making tourist soil their pants.

When Bill Clinton stayed in the Biltmore Hotel, located in Miami’s swanky Coral Cables neighborhood, he blamed the fact that he couldn’t get decent TV reception on the ghost of slain mobster, Thomas “Fatty” Walsh. Walsh was shot and killed on the 13th floor of the hotel during the time of Prohibition.

And Fatty isn’t the only phantom scouring the hotel. During World War II, the hotel served as a military hospital. Rumors abound concerning dead bodies materializing out of the ether, severed limbs, and the sound of screams echoing from abandoned doorways.

Flying Saucers and ghosts, the perfect combination. Gulf Breeze, located in the Redneck Riviera, way up in the panhandle just before entering Alabama, has the distinction of being the town with most UFO sightings in the USA.

It is a place full of legends revolving around little green men, skunk apes, sea serpents and dozens of phantoms and wraiths.

Off the coast of Key West, in the idyllic Caribbean, stands the Dry Tortuga national park. What will you see at the Dry Tortugas, aside from azure white caps, emerald seas and the best sunset in the world? One of the nation’s oldest prison. A hotbed of foulness that housed one of the knaves that aided Booth in assassinating Lincoln.

Fort Jefferson, located on Garden Key, is where Dr. Samuel Mudd was imprisoned until he was granted a presidential pardon. And why was a collaborator of Booth, a man who had participated in conspiring to kill the nation’s most beloved leader given a get out of jail free card? Because he was instrumental in saving dozens of lives during a severe Yellow Fever outbreak in the Fort. That same outbreak, not to mention the harsh conditions that affect the jailed lives on a daily basis, spawned the dozens of spirits that now haunt the spot.

Florida has continuously been hit by Hurricanes. It has constantly been battered and punched by these monsters. A little known fact of this phenomenon is that most of the West Coast towns of Florida are now built over mass graves. Way back before the weather could be predicted, and Florida was basically a shanty town with a few mansions, hurricanes would cleave into the state and leave massive death tolls. We are talking rates in the hundreds or even thousands. The bodies, due to health reasons, were then scooped up and tossed into a communal burial pit.

Islamorada, in 1935, was hit by such a devil. It ended up eating over 408 souls, on this small key alone. These souls and spirits are said to haunt the archipelago, primarily around the small monument dedicated to their memory.

A safe haven for shipwrecked sailors built in 1876 by the U.S. Life Saving Service. There were ten houses standing on the spot, but after years of disuse, only one of the original still survives.

The place was a den of thieves and demons. Full of hard men with hard pasts. Each one leaving a piece of themselves and their souls inside the building. It is considered one of the most haunted buildings in Florida and continually spooks the tour guides and guests that visit it.

This one is a doozy. What does Florida have aside from Disney, Ricky Martin, Pitbull, great beaches, and a checkered history? It has spiritualist… so many that it is actually the Psychic Capital Of The World.

This historical community was founded by medium George P. Colby in the 1800s. A Native American spirit commanded him to do so and he didn’t even bat an eye.

You can find just about anything in this place. Drum circles, group meditations, spiritual healing, haunted houses, spooky cemetery. Still, the cherry on top of all the bizarre shenanigans has to be The Devil’s Chair. A rather interesting chair located at the local Cemetery. The chair is said to be haunted by Satan himself. Local belief and custom dictate that if you really want something you can ask Old Scratch a favor on that spot. Unlike other spots, like famous Robert Johnson crossroads, here it will just cost you a beer. That’s the price. Leave a brewsky. If Satan is willing to give you your desire he’ll signal it by drinking the cold Bud up. Final tip, he’s partial for stouts, so spare him your Coronas and go for a Negro Modelo.