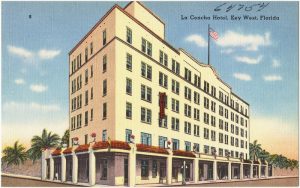 La Concha Hotel sits right on Duval Street, and is just around the corner from famous Key West landmarks like Mallory Square, the Hemingway House, and the Key West Aquarium. Built in 1926, the hotel is a bonafide part of Key West history, and its haunted past has added to the folklore in a city already known for ghosts, cursed dolls, and spooky Spanish forts. La Concha Hotel was built by local developer Carl Aubuchon, who sought to build the first luxury hotel on the island. At the time, Key West was the largest and most prosperous city in Florida and was known for its many cigar shops and vacation homes. Henry Flagler had developed the city as an island getaway, but there were yet to be any real tourists, rather the well-off who saw the city as a place to build their private seaside mansions. Aubuchon wanted to bring tourists down to the Keys, so he got to work on building La Concha Hotel. Once completed, visitors flocked to the island. There was no place in Key West where you can get sweeping ocean views, private bathhouses, and luxury living like at La Concha. It also had an elevator, a modern feature for the time. Moguls like Ernest Hemingway and Harry S. Truman, who both lived on the island, enjoyed spending time at the hotel. Like everything else in the haunted city of Key West, the hotel quickly became known as a haven for ghosts and spirits. First, a suicide, when a man jumped from the rooftop bar. Then another suicide, and another. Then a waiter fell to his death when he backed into an elevator shaft. Thirteen suicides and a freak accident later, and La Concha became one of the most haunted buildings on the island. Today, guests and staff often encounter the ghost of the dead waiter in the elevator. He also seems to hang around the fifth floor, where guests can hear his cries for help. The rooftop bar is now a spa, and in addition to getting the highest view in Key West, you’ll also encounter the ghosts of the thirteen lost souls who ended their lives at La Concha. One of the ghosts likes to snatch drinks from unsuspecting guests before disappearing into thin air.

In the late 1800s, Key West was the largest and richest city in Florida, its economy booming from cigar making and salt mining. It was also a major base for the US Navy. Even then, it was a relatively isolated city, accessible only by sea. In 1912, Henry Flagler extended the Florida East Coast Railway down through the Keys, spurring growth in the local economy. Well-to-doers and socialites began building their private getaways and vacation homes in the city, spawning the beginnings of the Conch Republic.

In the 1920s, Carl Aubuchon decided to capitalize on the increasing popularity of Key West as a vacation destination. He began work on the La Concha Hotel, hoping to open the beauty of Key West to people who couldn’t afford to build a seaside mansion, but still wanted to have some fun in the sun. La Concha opened in 1926 as the first luxury hotel on the island. At six stories tall, it was the largest building in Key West, and still is today. Guests couldn’t get enough of the beautiful views from the rooftop bar. The luxurious private bathhouses and marble floors were a nice touch too. The hotel had an elevator and was probably the first building in Key West to have one. La Concha instantly became part of the lazy Key West lifestyle. Writer Ernest Hemingway was a regular at the rooftop bar, and Harry S. Truman liked to spend his weekends here as well. Playwright Tennessee Williams also frequented La Concha. Williams finished A Streetcar Named Desire while staying at the hotel, which went on to become one of the most revered plays of the 20th century.

It was all fun and games until the Labor Day Hurricane of 1935, which decimated the city and killed hundreds of residents. The hurricane destroyed the Key West Extension of the East Coast Railway, and halted construction of the Overseas Highway, hampering tourism to the city. La Concha saw a lull in business because of the devastation. The railway was never rebuilt.

La Concha bounced back in the 1940s when the federal government built the Overseas Highway on the remains of the old railway, bringing vehicular traffic to the city. The bar was one of the many places where Cubans who came over on ferries mingled with Americans before the Cuban Revolution.

La Concha today is one of the premier hotels in Key West. It still retains its status as the tallest building on the island. Despite being a major luxury resort and tourist destination, La Concha is known among the locals for the several accidental deaths that have occurred over the years, and many are well aware that ghosts live within its midst.

Key West is a haunted city, and La Concha quickly became part of the ghostly landscape after being built. Guests and staff often report unusual cold spots, feelings of being watched, hearing disembodied voices, and strange apparitions in their rooms at night. Many also report seeing strange figures standing at the foot of their bed.

Over its 95 year history, thirteen unlucky guests have committed suicide by jumping from the roof. That’s one person every 7 years! Maybe the ghosts drove them mad? Nobody knows why so many have jumped to their death from the roof of La Concha, but it may have something to do with the fact that the hotel is the highest building in the city. The ghosts of the lost suicidal souls still haunt the building, and many say they are the spirits behind the hauntings at La Concha. They’ve often been seen taunting guests on the rooftop. Though it used to be a bar, it now also houses a spa and a place to watch the sunrise.

One ghost, in particular, likes to snatch the occasional drink from the hands of the hotel’s guests. Specifically, they prefer chardonnays. It is said that one of the suicidal spirits was drinking a glass of chardonnay before taking the plunge and is always looking for another glass before moving on to the afterlife. To this day, bar patrons are usually warned before having a chardonnay, that there’s a strange ghost who may be looking to steal your drink.

In the 1980s, a busboy was cleaning up after a New Years party on the fifth floor. While wheeling the cart out to the hallway, he accidentally backed into the elevator shaft, which for some reason was left open. He died instantly. The poor busboy still haunts the elevator and the fifth-floor hallways. The elevator often stops on the fifth floor by itself, as if trying to lure guests into a nightmare. He can also be seen wheeling a cart toward the elevator, only to walk through the elevator doors and disappear. Many also hear him calling for help at night as if he were still trapped at the bottom of the elevator shaft.

Ernest Hemingway would often spend the night in the same suite every time he stayed at the hotel. The room has come to be known as the Hemingway Suite. Many who choose to stay in the Hemingway Suite are abruptly woken up in the middle of the night to objects being moved, their bed being shaken, and things flying across the suite. The TV, lights, and bathroom faucet also tend to turn on by themselves.

La Concha Hotel is home to a small, haunted gift shop on the first floor, known for all sorts of paranormal activity. The gift shop is usually the first stop in many of Key West’s local ghost tours. Quite a few of the guests at La Concha are familiar with the hotel’s haunted past and are either thrill-seekers looking for a scare, or professional ghost hunters looking for hard evidence of spirits.

Read more about the haunted history of Key West!

The Florida Keys have a strange and unique history. Bloodshed from the Spanish-American War along with the culture clash resulting from the mix of Cuban, Bahamian, and American cultures have left behind an interesting legacy that has created a whole host of folklore. The city itself is known for all kinds of creepy ghost stories and strange tales. Read about the strange tale of Carl Tanzler, who was so obsessed with a woman that he married her corpse. Try not to get eaten by the Lusca! This frightening sea creature looks like a hybrid between a giant squid and a shark, and is highly feared by the native Caribbean tribes. Be wary of Robert the Doll, the most haunted doll in the world. This creepy character can be found at the East Martello Museum. He might leave a deadly curse on you if he feels disrespected, so tread carefully! You can also read about the top ten scariest places in Florida right here!