The Conch Republic A Tale Of The Underdog Winning 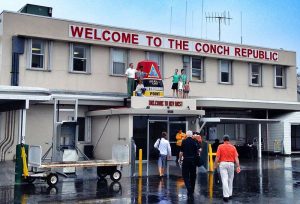 Only in Florida, and more to the point, only in Key West could something like this have happened. The Conch Republic, the nation within the nation that made a fool out of the Navy, the government, and proved once more that liquid courage isn’t only a thing, but quite possibly the skeleton key to fixing certain quack-mires. Let’s crank up the madness.

What is the Conch Republic?

The Republic is an off-the-book Caribbean micronation that in the 1980s managed to get the US Navy to peacefully surrender to their Prime Minister. Not only that, but it’s also a nation that did all of this in US territorial waters and less than 100 miles from the United States’ mainland. Bet they never thought you that historical landmark in history class.

A Chronology of Comedy

In 1982, the United States Border Patrol started setting up a roadblock and inspection point on US 1. Just a mile north of where Monroe County and Dade County shake hands. The cops were on the lookout for smugglers, narcos, and knaves. Anyone that looked a bit funky was stopped and frisked… if you’ve gone to Key West, you know that that’s just a description of every living being.

The roadblocks funneled the only two roads connecting the Florida Keys with the mainland and stopped traffic cold in its tracks. Worse, the whole police barricade was set up right in front of a Floridian landmark – and place of ill repute, in the good way – The Last Chance Saloon. South of Florida City, the cops were cracking down on anyone entering or exiting the Keys.

And, using the cover screen drugs allowed them, the Agents were also dealing a blow to illegal immigration. So, party central – Key West – now had a gaggle of bouncers who checked your belongings for narcotics, suspicious activity, and a birth certificated. Key West, the town the disgorged Captain Tony, Jimmy Buffet, and gave asylum to Truman Capote, Harry S. Truman, F. Scott Fitzgerald, Papa Hemingway, and dozens more now had a tea-toddler at the gate. No good could come out of abortion.

Tourism went down… WAY DOWN. Miami International Airport served as the main hub for travelers who want to visit the Keys and there was no way of avoiding Big Brother at the Last Chance Saloon. The Key West City Council complained constantly about the inconvenience for travelers to and from Key West.

When the City Council’s demands for action went unanswered by the U.S. federal government and attempts to get an injunction against the roadblock failed in court, mayor of Key West, Dennis Wardlow, went:

“Screw it, I’m doing this Key West style. Jimmy, Captain Tony, Iguana Man, and Pablo with the cats, Avengers Assemble! Put down the bong… all of you!”

On April 23, 1982, Wardlow and the Key West council declared their independence from the yolk of The United States. Since the U.S. federal government had set up the equivalent of a border station, then they might as well go all the way. The Keys became a foreign nation. Washington meanwhile received the news and once more asked the God’s above: “what the hell is in their drinking water?”

The locals were already regionally referred to as Conchs, so great minds came together and crafted a nation whose anthem would no doubt be a rip-off of Margaritaville. Thus the Conch Republic was born.

Oh, and it gets weirder.

As part of the protest/declaration of independence, Mayor Wardlow was named Prime Minister of the Republic. A flag was commissioned and passports were handed out.

Borders were drawn out, and Wardlow said “chuck it” and decided to invade the rest of the Keys from his stronghold in Key West. Instead of tanks, he brought bikini-clad señoritas, Patron Tequila, and country music bands…

Like being rescued up by the mothership. The Keys fell in one narcotic hazed swoop.

“All of the Florida Keys, or, that geographic apportionment of land that falls within the legally defined boundaries of Monroe County, Florida, northward to ‘Skeeter’s Last Chance Saloon’ in Florida City, Dade County, Florida, with Key West as the nation’s capital and all territories north of Key West being referred to as ‘The Northern Territories'”.

Borders set… no one really wanted the croc’ infested cesspool north of Skeeter’s.

Then, because, shoot why not? the Conch Republic immediately declared war against the United States.

For years the whole rigamarole kept happening. Border patrol, Conchs with US Passports storming the White House. Rinse and repeat. It was a tongue-in-cheek protest until the game-changing year of 1995.

On September 20, 1995, the 478th Civil Affairs Battalion of the United States Army Reserve was conducting training exercises off the coast of the Keys. They were simulating an invasion of a foreign island. They were to park their ship on Key West and conduct affairs as if the islanders were a hostile foreign nation. It was supposed to be a pop-quiz for the Battalion, so part of the strategy was to surprise the  “native government” in order for it to act naturally wiggy.

Wardlow saw an opportunity to get back and deal a crushing blow to those blackguards from up North. The Prime Minister mobilized his forces and prepared for full-scale war.

The first blood was drawn by the crafty Conch. Under the cover of the Sunset Festival, Wardlow sent out the schooner Western Union to attack the incoming Coast Guard Cutter with the zeal and might of the great Republic. The plucky sailors, loyal and prepared to give their lives for their rum-runner ideals bombarded the awestruck Cost Guards with water balloons, conch fritters, and stale Cuban bread.

“My dearest Eleanor, news from the field finds my spirits high but my heart yearning for your touch.
It has been a fortnight since we attacked the enemy and meet their arrows straight on. Dear Eleanor, I looked into the eyes of death, and those eyes were vacant, flabbergasted by my men’s courage and determination. The assault was brutal. The first volley of fire saw our Captain peppered with friendly fire as crust smacked him in the eye. The inhumanity of it. Yeast far too gone to dip contaminated our rations; the suds of Mexican Glory known as Corona were the first to fall. Our first mate, Crystal Palace, counterattacked. I kid you not, her throaty rendition of Gloria’s Conga became our battle cry. Salsa music dazzled the miscreants and one more gave us the upper hand. If I had 3 more like her, this war would be over by midnight.

Still, I bring ill tidings. The enemy was more prepared than we had thought. Eleanor, they retaliated with fire hoses, our beers quickly watered down, Charlie went overboard – his prodigious belly saving him from an onslaught of clownfish attracted by the panaderia’s rotten leftovers… the horror… the horror.”

The battle quickly ended, but back in Key West headquarters, the war room buzzed with electricity. The news and footage had been picked. Wardlow’s gambit had paid off. The Coast Guards were not ready for a press war. Shots of smudged glittered mascara cross the globe. Bellies red with sunburn reached the UN. Forensic reports of, gasp, innocent Mai Tais and Mojitos floating lifelessly in the Gulf brought shame to Bush’s handle of the delicate situation.

The leaders of the 478th issued a public apology the next day,

“In no way meant to challenge or impugn the sovereignty of the Conch Republic.”

The Coast Guards under orders from the Hill submitted to a surrender ceremony on September 22. The Conches received their unconditional surrender and symbolically started breaking a loaf of stale Cuban bread over the head of a man dressed in a naval uniform.

The war had been won… The Conch Republic was finally an officially independent nation.

One minute after the US had surrendered, the Conch Republic flipped the script and went “we want back in.”

They quickly surrendered – every US Coast Guard doing a double-take, Washington once more crying out loud “really, what are they drinking?!”

Wardlow then applied for one billion dollars in foreign aid.

Tensions have nonetheless been fraught throughout the years – they did not receive their billion bucks.

During the U.S. federal government shutdown of 1995 and 1996, the Republic sent a flotilla of Conch Navy civilian and fire department boats to Fort Jefferson, located in Dry Tortugas National Park, to reopen it. The action was called a “full-scale invasion”.

They celebrate their independence on the week of the 23rd of April… Because, really, there’s no Fantasy Fest in Spring and you always have a reason to party in the Keys.