Most Haunted Places in Key West: #9 The Porter Mansion 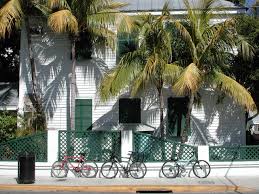 Historic homes are very popular locations for tourists to visit each year. It also helps if they’re a little bit haunted! The Porter Mansion, also known as the Porter House, is just one of these homes. It was originally built in 1839 and it was a two story home. In 1870, a third level was added to the home. The home mixes a few styles of architecture that were popular at the time: Bahamian, New England, and French. Locals believe that the home was built by Judge James Webb and he sold the house sometime in 1838. The house was sold to Joseph Porter in 1845. He was from Charleston, South Carolina and he and his wife wanted to start a family here in Key West. They died at very young ages, 32 and 30, but did have several children. The children were cared for by their grandmother.

One of the children of the Porter’s was Dr. Joseph Yates Porter. He was born in the home and lived here for 80 years! In fact, he was born and died in the same room! Dr. Porter was a very important man in Key West. He discovered that yellow fever was spread by mosquitoes and he ended up saving many lives in the Key West area. He worked for many hospitals and went to work for the Army Medical Corps as well. He married and the two of them decided to renovate the Porter Mansion. They are the ones who added in the third floor to the home. They also added balconies and changed the style all together.

The mansion is loved in the city of Key West and was added to the US National Register of Historic Homes in 1973. The Porter Mansion has quite the history and it also has many sightings of ghosts here. Visitors have even said they have seen the ghost of Joseph Yates Porter.

Today, the Porter Mansion serves many purposes. There are apartments in this building and some offices. Those who reside here say that they have seen some strange happenings. In fact, those who live on the third floor have seen the most activity. For one of the residents on the third floor, he has noticed some strange activity with coins. That’s right, coins! The resident said that he will be  in the living room just watching television or working on his computer and he can hear some strange sounds. The sounds are very light, but he knows someone is in there. When he walks into the bedroom, he sees a collection of coins stacked on his dresser. He said the first time that this happened it really scared him, but since the spirit that is doing it is not bothering him or anything else in the apartment, he just lets it do it. He said that now it is kind of entertaining and thinks it’s a gesture of friendship and nothing angry or hurtful. There are other tenants who have also had encounters with this ghost… 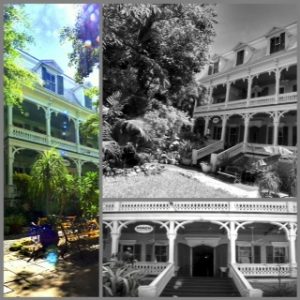 A young woman who also lives on the third floor has said that she hears strange sounds at night. When it is time for her to go to bed, she will lay down and suddenly wake up. She wakes up so quickly because of the very loud chamber music she hears coming from her living room. Each time that this happens to her, she walks all the way into the living room and says, “I’m trying to sleep. Try again tomorrow.” She said as soon as she expresses that she is trying to sleep, the music stops and doesn’t start again for another two or three days. She said at first it was very annoying, but now, she also considers this spirit to be friendly and not there to hurt her. It does cause her to lose sleep though!

A man who has an office in the Porter Mansion has said that he has seen many ghosts in the hall right outside his office. He said that one day his door was closed because he was with a client. He has a window in the door, but it is one that has that washed out look to it, so things look blurry most of the time. He said that he saw a figure walking back and forth in front of the door. He just thought that his meeting with his client was going too long and it was another, more impatient client waiting on him. His meeting with his client ended and they shook hands. He said, “Let’s see what this guys wants”, in reference to what now both men thought was a new client. When they opened the door, no one was there. There was no one in the hall and both men looked very confused. The man went to the front desk and asked if they had seen anyone waiting on him and they said there had been no one here for him while he was with his client.

There is a bar in the mansion too. The staff that works in the bar has their fair share of ghost stories to tell too. One bartender loves to share his stories with locals and visitors alike. He said that he experienced the ghost of Dr. Porter the first or second night of working at the bar. He was closing up the bar all by himself and he felt that someone was still in the bar. He thought he might have been a customer that had gone to the bathroom and just made it out. He said, “Hey man! I already made last call” when he heard the door open. No one spoke back to him. Then he just thought that the customer probably left, so he went about his cleaning for the night. Before he could get to his next step of cleaning, the wine glasses started falling off their shelf and breaking on the bar top! This scared him so much that he ran out of there! He said that when he came back in, after calling for help, there were broken pint glasses on the bar top as well! Needless to say, he quit working his job as a bartender here. He said he just couldn’t  take being scared like that on a nightly basis!

Not only have other staff members also had encounters with ghosts, but one bartender remembers one of her shifts when she saw something incredibly strange. She said that it was a very busy Friday night at the bar. She was running around trying to make drinks and trying to get everyone’s food orders in. She had one empty seat at the bar and after turning her back to get a bottle of wine, she turned around to see that the seat was suddenly filled by a man. She said that she thought he was an actor from one of the historic societies or from the theatre. She mentioned that they often came dressed in costume so she was used to this. She described his clothing as something from the late 1800’s. She said he smiled at her, but didn’t speak at first. So she asked him what he was drinking and he pointed to the wine she was holding. She poured him a glass and put in down in front of him. He said nothing to her and when she turned around again, he was gone. The glass of wine was still there and there were enough dimes on the bar top to pay for it. She asked other customers around him if they saw anything and she was the only one who saw him! She said that this has happened several times now and none of the customers ever see him. After seeing photographs of Dr. Porter, there is no doubt in her mind that he is the man who comes to have wine with her!

Just with many other hauntings, residents have also reported seeing orbs in pictures that they have taken. The coins seem to be a theme of the ghosts here and many people still agree that it is Dr. Porter leaving his money around. After all, he was considered one of the richest men in Key West at his time. Perhaps he is just trying to share his wealth from beyond the grave!

Paranormal investigators are still trying to figure out who the young African-American girl is who is seen frequently and residents have been trying to do more research on who she is as well. There have been rumors that Dr. Porter may have had servants that worked for him. She could be the daughter of one of his Bahamian servants. We may never know who this ghost is, but we do know that the Porter Mansion is one of the most haunted places in Key West!