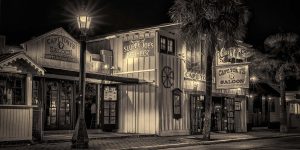 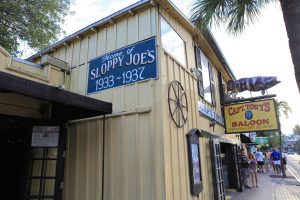 Captain Tony’s Saloon has been given the name of the most notorious bar in Key West and for many good reasons! The bar was once called Sloppy Joe’s and it was a favorite watering hole of Ernest Hemingway, Truman Capote, John F. Kennedy, and Jimmy Buffet. It was built in the 1930’s and purchased by Captain Tony Tarracino, hence the new name. The building always seemed to have a macabre history from the very beginning. There are trees on the property that were used for public hangings. One of these trees is still in the building! There were 75 to 85 people hung here for murder, piracy, and other crimes. The building was also used as a morgue, then a bordello, a telegraph office, a speakeasy, and a cigar factory.

In the 1940’s, the bar became a undercover gay bar. It was called the Duval Club and the owner decorated it in a Victorian style. There were lavish parties here and the gay patrons tried to proposition the sailors that were staying in Key West. The owner, Morgan Bird, was threatened many times to stop having these parties. The Navy gave him many warnings. He continued having the parties, but the Navy placed the club on the off limits list for its sailors. This caused the business to lose 80% of their business, forcing Bird to close the club. This was another tragic chain of events that caused the bar to be sold again. This building has seen a lot and that could be the reason that it is notorious and haunted!

Renovations Expose A Dark Past

In the 1980’s, there were some important renovations that needed to be done to the bar. Part of these renovations meant taking up the floorboards and installing new floors. This would prove to be one of the most horrifying experiences for the team. When they were pulling up  the floors, they found the remains of about 20 human beings! There was a gravestone there as well. It was for a woman named Elvira Drew. Drew was married early in life, around the age  of 14 or 15. She married a much older man, who was in his fifties or sixties. He was an alcoholic and very abusive. She died in 1822 when she was only 19 years old. How did she die? She was hanged on the hanging tree for killing her husband. Her gravestone had been under these floors for over 200 years! 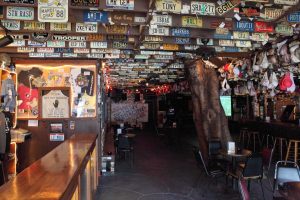 There was another gravestone found in the floor of a woman named Reba Sawyer. She lived from 1900 to 1950 and when she died, apparently her husband found some very scandalous letters between her and her lover. The letters described their feelings for each other and some sexy trysts that they had had. They always would meet at Captain Tony’s to begin their time together. The husband was so mad that he took his wife’s coffin and dug a hole for it under the tree in the bar. He said “this is where she wanted to be, so this is where she will stay.”

The number of bodies that were found under the floor is terrifying, but these souls could be the ones that are haunting Captain Tony’s Saloon today.

The Lady in Blue

Captain Tony’s Saloon is home to many ghosts and one that has been seen frequently is the Lady in Blue. The story of the Lady in Blue begins with the hanging tree. There were close to 20 people hanged here for various crimes and it is said that she is one of them. The story goes that she stabbed her husband and two children to death. The city wasted no time in hanging her. In fact, she was hanged in the same dress that she killed her family in, a blue dress covered in their blood! Many locals say that she went crazy and that is what caused her to kill  her entire family. Many think that her husband was cheating on her and that’s why she did it. No one really knows what happened, but she is the ghost that is seen most often in the  bar. She is seen walking all around the bar and sometimes, she will scare customers away! We think it must be all the blood on her dress! 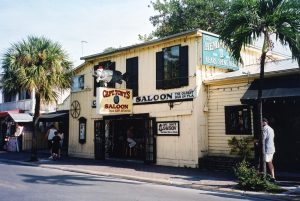 Another story that is told by the staff here is about another young woman. This story follows her into the bar when it was a speakeasy. She was concerned that evening about where her husband was, so she went to find him. She had her baby with her and decided to check for him in the speakeasy. She found him and when she did he was drunk and kissing another woman! When she saw this, she instantly went mad! She ran into the women’s restroom and killed the baby. She left it there and ran out! No one knows what happened to the woman, but this is just another one of the terrifying stories of the deaths in this building!

Visitors from all over the world come to Captain Tony’s Saloon. Many of them come to bask in the world that Ernest Hemingway enjoyed, while others come to see if the ghost stories are true. Many people who come to visit experience most of the paranormal activity by the women’s restroom. One woman said that she went into the restroom and tried the first stall, but it was locked. So she went into the stall next to it. When she looked down, she noticed that there was no one in the first stall. She was confused why it was locked if no one was using it. Before she left for that evening, she went back to the restroom, hours later, and the first stall was still locked! She also said when she was in the stall, she heard the doors open and close as if other women were coming in. She never saw anyone else in there!

The owner of the bar is named Joe Farber. He has never considered himself to be open to ghost stories or experiences of the sort. He says that after a few experiences in the bar, he may now be a believer in the paranormal. One night,he was closing up and it was around 4 am. He heard someone calling his name. He got up from what he was doing and saw no one there. He walked back, but noticed some doors were open that he had closed and locked hours before. He didn’t blame any of this on ghostly activity because it didn’t happen to him again. Until a few years later… The same voice was calling to him and this time it said, “Don’t leave, Joe.” He didn’t notice anything unusual that night, so around 3 am, he decided to go home. Around 6 am, Joe got a call from the police and they said they found a body in front of the bar. A young girl called her mom from the bar and had overdosed on pills to commit suicide. According to the police, she died there around 3:30 am. Joe thinks that the spirit was trying to tell him something. Perhaps he could have saved this woman’s life! Does anyone know for sure? The spirit does…

A visitor to the bar said that they wanted to check out the hanging tree closer. After having a few drinks with friends, one of the man’s friends dared him to try to climb up the hanging tree. This just seemed absurd at the time, but as the beers and shots kept flowing, he was thinking more and more about climbing up the tree. The instant that he touched the hanging tree, his hands began to burn. Then he felt as if they were sizzling. When he took his hands off the tree, they were incredibly burned. He had to go to the emergency room in order to make the pain stop. It was a huge surprise to the doctors that this man ended up with third degree burns from touching the hanging tree!

What is it about this haunted place? What attracts people to come here and engage with the ghosts? Whatever it is, there are quite a few ghosts that still live here. Perhaps when you come to visit, you will be sitting and having drinks next to the lady in blue. Maybe you will rub elbows with a famous pirate. You never know who or what you will see here.