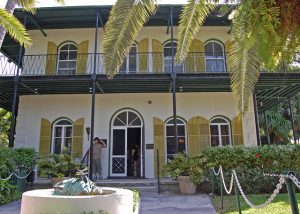 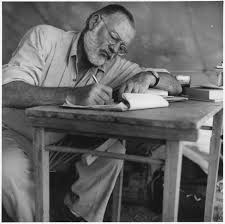 Ernest Hemingway is known for his love of Key West. He loved the ocean, the people, and the city so very much. He wrote about the city and even had a home here. Calling Key West home was just one of the reasons he loved writing here and being here. One of the most beautiful places in Key West is Hemingway’s home. This beautiful home sits in the city and has been said to have some haunts of its own.

History of the Hemingway Home

The Ernest Hemingway Home and Museum are located at 907 Whitehead Street in Key West, Florida. It is in the part of town known as Old Town Key West. This home is one of a kind and is known for its beauty and uniqueness. It was also home to one of America’s favorite authors, Ernest Hemingway. Hemingway lived in the home for about ten years and this was a wonderful place that inspired his works. The gardens here are beautiful and the rooms give you an idea of what Hemingway was like. One of the best things about visiting here is that there are more than forty cats that still roam the property.

This home was built in 1851 by Asa Tift. Hemingway purchased it in 1931 from the city of Key West. It was completely boarded up when he bought it and he and his wife, Pauline, took the time to fix it up and make it look as beautiful as it does today. The two lived in the house for ten years with their sons, Patrick and Gregory. Most of Hemingway’s fans say that he was the most productive when he was living in this house.

In 1940, Hemingway moved to Cuba with his new wife and Pauline and the boys stayed in the home until she died in 1951. Ernest was renting out the house while he was in Cuba, but he did return to Key West in the 1950’s. He died from a self-inflicted gunshot in 1961. The house was sold to a couple in Key West who decided to turn it into a museum. They still own and run the museum today. Even though the couple does like to remain private, they have shared stories of the hauntings here, along with the staff members that work here.

For fans of Hemingway, they grew to truly appreciate his many works. Most of his famous books and poems were written in Key West. This city was a huge inspiration for him. During his lifetime, he wrote the following books: The Sun Also Rises, Farewell to Arms, To Have and Have Not, For Whom the Bell Tolls, The Old Man and the Sea, and Garden of Eden just to name a few. He worked diligently on his work while he was in Key West and many say that it brought out another side to him.

The Hauntings of the Hemingway Home and Museum

Shortly after Hemingway passed away, people began telling stories about seeing his ghost in the open. They reported to seeing the ghost walking in and around the house and gardens. Some say that he was even playing with the cats outside! Some of the people that had seen Hemingway didn’t know that he was dead yet. They made reports of seeing him out on the second level of the home. They said he was tending to the plants out on the veranda just like he used to do. They would wave at him and he would wave back, so they thought it was Hemingway himself. They had no idea that it was simply a ghost of the author. 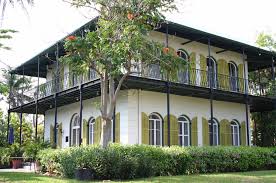 Many people are not sure why Hemingway’s ghost is haunting the museum because he actually died at his home in Idaho and not in Key West. The veranda of the home was one of his favorite places to hang out and he loved to say hello to the locals walking by and make them feel welcome and that people of Key West were friendly. This is one of the places that his ghost makes regular appearances.

The staff members that give tours of the home say that they have seen Hemingway a few times in his writing room. This is a loft area where he would spend most of his time writing and working on his books. Locals and visitors that have toured the home said that there are areas of the home where they can even hear a typewriter. Many assume that this is Hemingway working on one of his books in the loft writing room. Ernest is not the only ghost that visitors and staff members have seen though. There are been quite a few siting of Pauline as well.

Other Hauntings of the Museum

Imagine you are working your normal daytime shift at the Hemingway House and Museum. You are giving a guided tour when you see something out of the corner of your eye. This is something that you have never seen before and you’re not really sure you even saw it or her. Yes, it was a her and it was Pauline, the first wife of Ernest Hemingway. She and Ernest lived in the home together and you tell your visitors that everyday, but now, you are seeing her in plain sight. Does anyone else see her? Is this really her ghost or is it a lost visitor? You wipe your eyes and you still see her sitting there. It is Pauline’s ghost right in front of you! 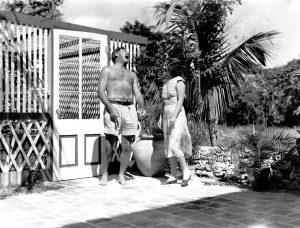 Can you imagine if you saw a ghost face to face and it was Pauline? This has happened to quite a few people that have toured the home and museum! The staff and visitors to the home have claimed to see Pauline’s ghost hanging around as well. Many people have seen her at the op of the staircase. This is said to have been her favorite place in the home and she could look out the window here and see her boys playing in the yard and she could be with Ernest while he was writing as well. This isn’t the only place that people have seen Pauline though.

The people that live in the neighborhood say that they have seen Pauline outside and smoking a cigarette at the entrance gate. This is something else that she liked to do it while she lived at the home. Locals say that she was often seen by the gate smoking and sometimes she would walk up and down the sidewalk next to the home smoking cigarettes. This is why people have just assumed that this is her ghost because she is the only woman that lived in the home that would do that. The other interesting thing about this ghost is that she doesn’t know how to put her cigarette butts in the trash. She will actually throw them out on the sidewalk just like she used to do when she was alive! People that have visited and walked by say that at any given time, they will find cigarette butts along the side of the gate where they have seen Pauline outside smoking.

It seems that there are many ghosts that want to continue to protect the home and keep it safe. Along with the famous, six-toed cats that Hemingway loved, guests will find the spirits of Ernest and Pauline trying to make sure that their home is being taken care of. If you decide to visit the Hemingway home and museum, remember that you may see some ghosts yourself. Who knows if you will see Pauline outside or if Ernest will be typing away up stairs in his loft? This home is worth visiting and you will see some amazing gardens and interesting six-toed cats while you’re here too!