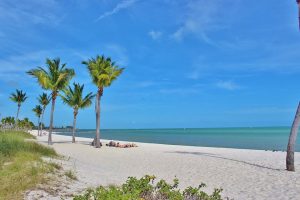 Of all the places in the world, many people see cemeteries as some of the most haunted. Is this because of the souls that rest here or could it be something else? One of the most popular and most haunted places in Key West is the Key West Cemetery. Known for its beautiful location, you can also find some famous spirits that like to hang out here as well.

The History of Key West Cemetery

In the Key West Cemetery, there are about 100,000 people buried here. This is a 19-acre cemetery that is popular among locals and visitors and there are more people buried here than live in Key West! In 1847, this cemetery was established and it seems that the main motivating factor was the hurricane that hit Key West and killed many people. This hurricane also washed away many of the graves in other cemeteries in Key West. 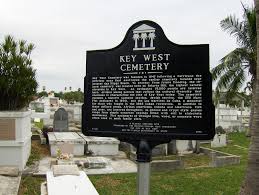 There are many graves here that stand out. Some of them are humorous, while others seem to add more history to the cemetery. For example, one of the highly visited graves here is that of a woman named B.P. “Pearl” Roberts. The tombstone says, “I told you I was sick”. Many visitors think that this is incredibly funny and some people say that she was a hypochondriac and that her doctors were never able to find anything wrong with her when she would come to see them. This is not the only interesting tombstones in the cemetery.

With many references to books and plays, one tombstone reads, “So Long and Thanks for All the Fish”, which is a reference to the Douglas Adams’s book. If literary references are your thing, you’ll find another grave here that reads, “GROK-Look It Up”, which comes from Stranger in a Strange Land by Robert Heinlein.

If you have a sense of humor like we do, you will love the following messages written on some other tombstones in the cemetery. They include: “I Always Dreamed of Owning a Small Place in Key West”, “If You’re Reading This, You Desperately Need a Hobby”, “I’m Just Resting My Eyes”, and “Devoted Fan of Julio Iglesias”. Clearly the people buried here had a sense of humor and wanted their family and friends to keep it going, even in their deaths.

There are many local favorites buried in this cemetery as well. The owner of Ernest Hemingway’s favorite bar is buried here, along with many soldiers of the Spanish-American War. There is a monument in the cemetery for the 260 sailors that were killed when the USS Maine exploded in Havana Harbor in 1898. The cemetery shows its dedication to the men and women who have served our country in many ways, but there are some strange stories about the Key West Cemetery as well.

The Twisted Tales of the Key West Cemetery

Not only are there some humorous graves here, there are also tales of the morbid and twisted. This could be how many of the hauntings and urban legends of this cemetery have gotten around to people. The first story is that of Count Carl Von Cosel. He did something that no one in Key West ever thought they would see or hear about. He stole the body of Elena Milargo Hoyos from her grave! How did these two know one another? Carl was a radiology technologist and helped many of his patients that were suffering from tuberculosis. Elena Hoyos was one of them. He became obsessed with Elena. She was young and beautiful and everything that he wanted in a woman.

When he first met her, he said that she was the woman that he had seen in his visions. She was known as one of the most beautiful women in Key West at the time, so he probably wasn’t the only man obsessed with her. At least over men’s obsession were from afar. Carl said that he could cure her with his extensive medical knowledge and he knew how to use the new x-ray and electrical equipment. While he was serving as her doctor, he showered her in expensive gifts and told her how much he loved her. She never showed him any affection though. She ended up dying in 1931 and Carl paid for her funeral. He also asked her parents for permission to give her an above-ground mausoleum in the Key West Cemetery. He visited her every night!

One night in April in 1933, Carl had a brilliant idea. He snuck into the cemetery and went to Elena’s tomb. He had a toy wagon with him, which no one even thought was conspicuous at the time. He removed her body and placed it in his wagon. He thought that if he got her home her spirit would come back to life. He said that he heard her voice tell him to take her home with him. He gave her wigs to wear and replaced some of her skin with plaster of Paris. He filled her decomposing body with rags to help keep its form. He would dress the corpse in stocking and jewelry. He used huge amounts of perfume on the body as well.

Rumors were floating around Key West that he had been sleeping with a corpse, so Elena’s sister confronted him. The corpse was discovered and he was arrested. He did go to trial, but the case was eventually dropped. The corpse was put on display and had thousands of visitors. It was buried again, but this time in a place where Carl would never find it. 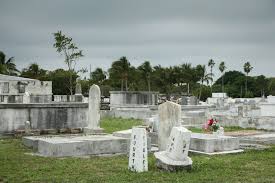 If this doesn’t spook you, there are more tales of this cemetery that surely will! Visitors to the cemetery have heard rustling sounds in the area and those could be the feral chickens that roam freely here. There are iguanas that live here as well and you can see them soaking in the sun on some of the markers during the day. Do you think you’re ready to go and visit the cemetery? You may want to think again when you hear the tales of ghosts here.

The Ghosts of Key West Cemetery

Travelers from the Bahamas would often come to Key West in order to make a better living or find a spouse here. One of the ghosts of the cemetery was a Bahamian woman. Tour groups, staff members, and visitors have said that they have seen this woman in the cemetery during the day and at night. This ghost is unlike a few that we have already covered because she becomes incredibly angry when she is seen. She gets very mad when visitors sit down on tombstones or if they walk across the graves in the cemetery. Many people say that she is mad because these people are disrespecting the dead and she is there to protect them. There are people that have seen this ghost and say that they feel very threatened by her being there. When they get closer to see her, she disappears into thin air. This is not the only ghost that is said to be haunting this cemetery though.

Imagine you’re walking through the Key West cemetery and you hear voices. You decide to take a right turn and change your path in order to follow this voice. When you get closer to the voice, you can tell that it sounds like a little girl and she is trying to get you to find her. She is playing a game with you and she really wants you to follow her. You continue to follow the voice that you hear and when you stop, you see a grave of a girl who died when she was only twelve years old. Could this be the voice that you hear? Is she trying to tell you something? 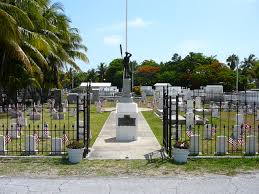 Many visitors to the cemetery have said that they heard a young girl calling out to them and when they followed the voice, there was never anyone there. They just ended up at the grave of a young girl. Could this be the girl trying to get you to come with her? Could she be trying to tell you something? No one knows for sure, but these visitors said they didn’t feel scared or any anger or resentment from this voice. For those who have seen the Bahamian woman, they felt much differently.

For visitors that have seen the Bahamian woman, they claim that she was very angry and had this strange sense of protection of the cemetery. Some psychics have visited the grave where she hangs out and they say that she is looking for someone. They are not sure if it is someone who wronged her when she was alive, but she is very angry at them.

No matter when you come to visit this cemetery, be careful of the spirits you come across. You never know if they are angry or just looking to play hide and seek with you!