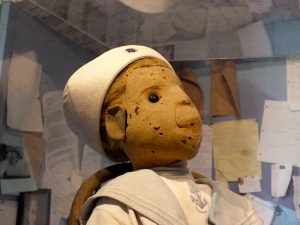 In Key West, visitors will find a museum that has quite the haunted history. This is the Martello Gallery, also known as the East Martello Tower. The museum is located at 3501 South Roosevelt Boulevard in Key West. It has been on the U.S. National Register of Historic Places since 1972 and it is known as one of the most haunted places in Key West. Could it be because the infamous Robert the Doll is housed here? Perhaps there are other spirits that linger around too.

History of the East Martello Museum

The East Martello Tower was used quite a bit during the Civil War. The construction for it began in 1862 by the Army and was built to add protection for Key West. The city wanted to be able to defend itself against any possibilities of a Confederate sea attack. Key West was being controlled by the Union army during the Civil War, but there were many citizens of the city that were in support of the Confederacy. It seems strange that with all of the differences on the island, no battles of the Civil War were ever fought here. Once the war was over, there was no use for it anymore, so the tower was abandoned and unfinished.

In 1950, the Key West Art and Historical Society had different plans for the building. They wanted to use the building as a new museum for the city and recover the beautiful tower. It has become one of the most highly visited spots in Key West and those who visit it love the history and information about it. Going from a Civil War tower to a museum took a lot of time and effort, but the outcome is one that locals welcomed and still cherish to this day. The historical society has kept many famous artifacts from the island and one of them even has a haunted history. 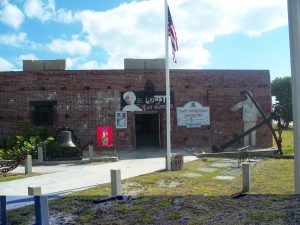 The story of Robert the doll begins with a child named Robert Eugene Otto. There are a few different stories as to how he ended up with the doll, but the one thing that they all have in common is that the doll has some sort of bad mojo attached to it, perhaps a spirit. No matter what story you believe, Robert the doll is pretty creepy and terrifying. The doll’s face looks like it has tiny scars all over it and the eyes are black and beady. There is a smirk on his face that just looks like he’s up to no good. The doll wears a sailor suit, which is said to be the child’s that owned him. He loved him so much that he wanted the doll to be dressed just like him. Otto, the child who owned the doll took him everywhere with him. The neighbors of the Otto family even mentioned that at times they were uneasy around the doll and thought that Eugene had a weird fascination with it.

Eugene was given the doll in the early 1900s and many stories say that it was given to him by a relative when he came back from Germany. Others say that it was given to him by one of the servant women of his family’s home and she used black magic or voodoo on the doll to cause misfortune to come onto the family because they fired her. The doll seemed completely normal at first and Eugene’s parents thought it was a great gift for their young son. Strange things did begin to happen shortly after he was given the doll. The night was pretty normal for the Otto household. Gene woke up to find that Robert the doll had moved from his side while he was sleeping, and now he was at the foot of his bed just looking at him! Shortly after, his mother woke up to his screams and the sound of furniture being thrown around! Gene was crying hysterically and was curled up because he was so scared. The door was locked, which Gene said Robert did it. When his mother finally got into his room, the furniture was thrown all over the room.

The stories of Robert causing commotion in the house got even scarier as he was in the home longer. Gene would often whisper to the doll and it would startle his family when they would hear a response coming from the doll. The voice wasn’t Gene’s though, it was a deep, husky, and dark voice that would come from the general direction of the doll! Some of the staff members that worked in the Otto home even said that they saw the look on the doll’s face change many times. It was something that most of them tried to steer clear of because of how uneasy it made them feel. The Otto family thought that once Gene grew up and got married, the doll would be gone for good, but they were wrong.

Robert the Doll was eventually locked in the attic of the Otto home. The family said that they could still hear him moving around while he was up there. There were even claims by the staff in the home that they would find the doll in the main house even though he was locked in the attic! The staff were terrified of the doll and just knew that he had some evil attached to him. The doll remained locked in the attic for quite a few years and it was said that Gene missed him, but also wasn’t afraid of going into his room alone anymore.

When Gene got older, he chose to keep Robert the doll in his home. When his parents died, he and his wife, Anne, moved back into their home. Gene gave Robert a room of his own and told Anne that he requested it! The room was upstairs and Robert could look out of the window and onto the street. There were many times that Gene would paint in his favorite room and he would have Robert sitting right next to him as if he was painting as well.  Passersby said that they felt uneasy about the doll looking down on them and some neighbors would avoid going by the house altogether. Anne was constantly asking Gene to give the doll away because it made her feel uneasy. Rumor claims that Anne died from being insane after she locked Robert back in the attic. Gene Otto died in 1974 and when a new owner moved into his home, Robert was still there.

The Donation of Robert the Doll

The new owner of the Otto home thought that her young daughter would love the doll. The girl made many claims that the doll was alive and it would talk to her and look at her. She also said it tried to hurt her on several occasions. She would wake up in the middle of the night screaming because the doll had moved around the room. This terrified the girl so her parents knew that they had to get rid of it. The doll’s new owners donated it to the East Martello Fort Museum and this is where he still resides today. The Otto home is now a bed and breakfast called the Artist House. Guests of the bed and breakfast have not reported any spooky sightings as of yet, but we think that Robert could be still lingering, or at least his spirit could be.

For those who get a chance to see Robert the doll, they are met with a warning. If they want their picture taken with him, they have to politely ask for his permission. The doll is in a glass case, but staff of the museum and visitors are still frightened of him. The museum has collected many letters of guests apologizing to the doll for any ill will they may have caused. Visitors have claimed that after leaving the museum they have had a string of horrible luck, including sickness, car accidents, and relationship troubles. One rule of thumb to remember when visiting Robert the Doll, be kind and courteous, and do not laugh at him. 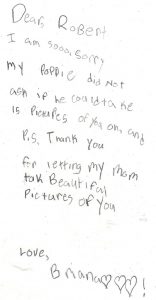 Robert the Doll is one of the main reasons that the East Martello Fort Museum is one of the most haunted places in Key West. If you decide to visit the doll, make sure that you are kind and polite to him because you never know what will happen!