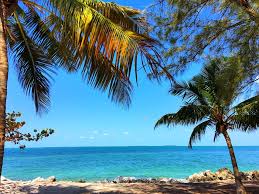 The Key West Firehouse is one of the most visited buildings in the city. It was built in 1907 and named Fire Station No. 3. It is located at the corner of Virginia and Grinnell Street. It is one of the oldest fire stations in the entire state of Florida. When the station was brand new, there were about 12 firemen who worked there, along with over 200 volunteers! The firemen had horse drawn steamers and hose carriages to put out any fires in the area.  This firehouse was known as Sunnysouth Engine Company and Tiger Hose Company No. 3. 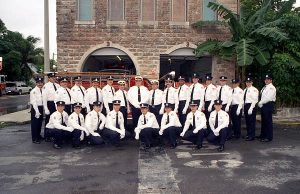 With most of the old older buildings in Key West, this one saw its number of hurricanes. One of the worst storms to hit was in 1909 and the winds got over 100 miles per hour! The roof of the fire house was destroyed during this hurricane. Luckily, none of the men in the building were hurt during this storm. The roof had to be renovated and this is only one of the renovations that the building has gone through since it was built.

In 1998, there were rumors that the building was to be demolished. A retired firefighter stepped in and decided he wanted to make a change to the demolition and keep the building in the city. It was a historic building that many residents cherished. There was a huge campaign to turn the building into a museum and with a lot of funding, it worked! There are many items in the museum’s displays and it attracts thousands each year. The historic memorabilia isn’t the only thing that attracts tourists and visitors. There are rumors that this building is incredibly haunted and this is yet another reason that people come to see it.

The Haunts of Firehouse No. 3

Imagine that you are going into a building for the first time to check it out. You are going to this building to decide just what you can do to save it from being demolished. You begin to walk around and you love what you see. The grand history of the building makes you pause to look at everything. You feel that this is the building that you will save and then you hear something… You look around, but you are the only one here. You think to yourself that it was probably a mouse just creeping along the walls and vents, so you continue to walk around and get a good picture of what needs to be renovated and what should stay the same. The noise… there it is again. This time, you are a little shaken by it. It has gotten louder and you’re not sure what it could be now. You take a deep breath and continue to walk through the halls; you tell yourself that your mind is playing tricks on you. The noise gets closer to you now and louder. Then you turn around and you feel a cold hand on your shoulder. It’s so cold that you can feel it through your shirt! You close your eyes and it’s gone. Never to be heard by you again! This is the story that many of the visitors and some of the new owners of the Fire House Museum have told. They know that there is a ghost or two in this building and they even had some paranormal investigators come and to check it. 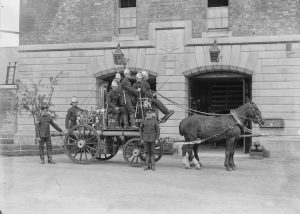 When the paranormal teams came into investigate, they found a lot of crazy happenings in the building. The first team of investigators took many videos and recordings of their findings. One of the first teams that did a full investigation here is based out of Miami. They were incredibly shocked when they got the photographs back. What they saw in these pictures really did shake them. So what was it? In one of the pictures of the firehouse, there was a very small girl. The little girl was African-American and she was dressed in the clothing of the late 1800’s or early 1900’s! The team knew that there was no one like that on their team, so they are 100% sure that she is one of the ghosts that haunts this building! This ghost isn’t the only thing that has been odd here.

One of the staff members rides his bike to work every day. He said on one particular day, something felt off in the firehouse. He went into his office, where he keeps his bike and right before his eyes, the tire just exploded. Out of nowhere! He said he was about to get on his bike and go out to get some lunch, but as he got closer, the tire just blew up! He said the tire was brand new and there were no signs of leaking air or anything! Another night that he was there, he was sleeping on an air mattress. While he was sound asleep, he felt someone kicking the mattress. It woke him up and he said he was quite a hard kick. He told the investigators that the kicks have happened more than once while he was sleeping in the building. Would this make you want to stay there?

Orbs and Spirits in the Firehouse Museum

When the Firehouse Museum opened up to the public, visitors from all over the world were curious about some things that they had seen in the building. One visitor, who used the restroom, said he saw a man in there with him. When he got into the restroom, he was checking his eyes in the mirror. He thought he got some dust in his contact lens. When he looked in the mirror, there was a man behind him. Standing very closely, in fact. The visitor said “Can I help you?” The man told him that he was Frank and he just needed the mirror. The visitor went about his business and when he came out of the stall, Frank was gone. He admits that he felt this weird sense of anxiety in his stomach when he didn’t see the figure there anymore. He did ask his tour group if they had seen a man that fit the description and the group members had not. The tour guide, however, simply said, “That’s Frank saying hello!” The visitor was truly terrified after that, he knew that he had seen a ghost! 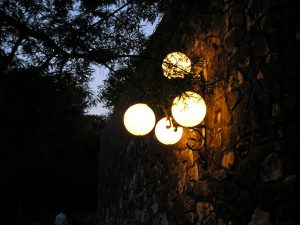 Members of other tour groups say that they have seen different spectres in this building as well. In some of their pictures of their tour, they have seen orbs flying around in the pictures. One of the younger guests said she made a Snap Chat video to a firefighter friend of hers and he texted her asking her what the flying lights in the video were! She had sent him real time footage of the orbs flying around the room! Other guests have seen the Bahamian girl walking around the building and some say that she even spoke to them!

Imagine that you are in Key West for the first time and you want to check out the Firehouse Museum. As soon as you walk in, you feel a very happy energy. You feel the energy of a young child dancing in the woods. As you continue on your tour of the building, you have a sense of happiness that surrounds you and you are curious where this feeling is coming from. When you go into the bigger hallway that is when you see her. You see this beautiful, young girl who is dressed in a yellow dress from the 1800’s. Her energy radiates and you think that she wants you to play with her. You follow her down the hall where she leads you. This is a grand room with a lot of historic memorabilia in it. The young girl motions you to keep following her and then, out of nowhere, she disappears. This is one story that a visitor shared about the first time that she came to visit the Firehouse Museum. She said that she had never felt so full of light and energy in her life and to this day, she hasn’t felt that way again. Could the little girl been trying to get her to play a game with her? Why did she disappear? Was there something that she was afraid of? We may never know the answers to these questions, but we do know that this playful spirit still roams the halls of the Key West Firehouse Museum.