Fort Jefferson in The Dry Tortugas – ghost, goblins and assassins in paradise.

HOME » BLOG » HAUNTED PLACES » FORT JEFFERSON IN THE DRY TORTUGAS – GHOST, GOBLINS AND ASSASSINS IN PARADISE.
Posted by blogger in Southern Most Ghosts 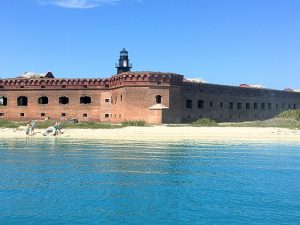 The Dry Tortugas, just a stone’s throw away from Key West and Fidel’s less that prosperous economic wonderland is one of the hidden gems of American history. As a proud Floridian, and even prouder American, I can’t help but bump folks over the head and shout:

“You haven’t gone to the Dry Tortugas? What is wrong with you!?”

Key West, well the Florida Keys to be exact is chuck full of just about everything. Caribbean beaches; rum-runners that will have you seeing double, even triple; emblematic personages, living and dead; crazy festivals that will make your head spins; ghost tours a dozen; haunted dolls; AND American history. History wise, you really can’t do better than Hemingway, Truman, CIA, pirate, Castro spies, magnicide doctors, and palm trees. Today, we’re going to talk about magnicide doctors and the presidents who pardon them.

Just a ferry ride away from the Keys sits like a toddler in warm bath water The Dry Tortugas National Park.

The Dry Tortugas are about 70 mi west of Key West, Florida aka the Conch Republic. You can visit the park by private vessel or by ferry, catamaran, or hydroplane. Only specific corporations have access to fish or dive near the Dry Tortugas. The NPS – The National Parks’ Service – has an official ferry called Yankee Freedom III catamaran, that goes to the area.

Spanish explorer Ponce de León was the main man that granted the Dry Tortugas their name. He gifted the archipelagos this headliner or a signature in his first visit to the Gulf in 1513. It is the second oldest European name on record in the US.

Tortugas means Turtles and the region was gifted this portmanteau because of the immense sea turtle community that called the inlets their home. On Ponce’s first trip his men scavenged the islands for this meaty game.

Historical points of interest before we get into the whole ghostly section of this ghastly write-up.

The word “Dry” was added later on. A way to tell mariners that the islands’ lacked freshwater sources.

In 1742 HMS Tyger shipwrecked in the Dry Tortugas. The stranded crew existed on Garden Key for over 56 days. While trying to survive in that desolate landscape they fought of a Spanish sloop and did teh swashbuckling fandango with teh Conquistador nation. They saved their bacon by making improvised boats and sailing to Jamaica.

Louis Agassiz, the Swiss-born American biologist and geologist known as an innovative and prodigious intellectual of Earth’s natural history visited the place 1858.

In 1989 Seahawk Deep Ocean Technology examined a wreck considered to be part of the 1622 Spanish treasure fleet. The smash-up was located in 1,332 ft (406 m) of water. It bore copper, gold, olive jars, silver, glass, and other artifacts.

During World War I, a seaplane terminal was installed in the islands.

From 1903 until 1939 the Carnegie Institution of Washington administered the Marine Biology Laboratory on Loggerhead Key it “…quickly became the best-equipped marine biological station in the tropical world.”

On September 6, 1622, the Nuestra Señora de Atocha was battered by a cruel hurricane. She was driven headfirst onto a coral reef in the area. Mel Fisher and his organization found the wreck on July 20, 1985. It had an estimated cache of over $450 million smackers. The press dubbed it the “The Atocha Motherlode.” Among the valuables were 40 tons of gold, silver, and emeralds.

A couple of years after “The Atocha Motherlode” Fisher once more scoured the area for booty. He found the remains of several shipwrecks, including the Atocha’s sister ship the Santa Margarita. He also uncovered the remains of the Henrietta Marie.

Thanks to the “wet feet, dry feet” Policy – a moniker given to a former account and revision of the Cuban Adjustment Act of 1966; the one that basically states that anyone who immigrated from Cuba and penetrated the United States borders would be entitled to attempt residency a year later – The Dry Tortugas was constantly featured on the news. Why? Because it’s the nearest US soil enclave near Cuba and a great place for balseros to make landfall.

Fort Jefferson in the Dry Tortugas

Fort Jefferson, the main historical attraction of the Dry Tortugas, is a bulky coastal fortress whose building started in 1824 and was never finished. It is the largest brick masonry structure in America; over 16 million brick. The fort is located on Garden Key within the Dry Tortugas National Park.

The United States government never completed the Fort, nonetheless during its years of duty it served as a strategic spearhead for the Caribbean. The Fort was instrumental in defending the rich mercantile area against privateers and ruffians.

When the Civil War broke out, the bastion remained in Union hand and kept watch over for Confederate movements in the Gulf. When the war ended, the place became a prison.

The bastion was eventually closed and teh prisoners moved to other jails. The place was constantly being hit by hurricanes, yellow fever epidemics, vandals, and an army garrison – which operated and administered the fort – that had a couple of screwloose. It wasn’t a cost-effective operation and the War Department decided to allocate its budgets into other boondoggles.

A small caretaker force was left in the fort. During a period it was used as a Marine Hospital Service, particularly as a quarantine site and a coal distribution station for US navy ships.

This is the ghostly hotbed. Everything bad that could happen on an island essentially happened at Fort Jefferson. Cannibalism, executions, murder, outbreaks of diseases – we’ll talk about that later on, inmates shanking each other, drowned Cuban refugees… You name the tragedy, Fort Jefferson has a story. This is basically ghost fodder.

The place is riddled with supernatural occurrences and wild poltergeists and specters. The Rangers stationed in the area, who patrol the Fort at night, are always going back home with something chilly to tell their loved ones.

The hallways have an eery feeling and unusual energies. Those brave few, those lucky few, campers that decide to stay overnight on the shores of Fort Jefferson tell tales of strange lights and devilish sounds at midnight.

Tourists and visitors, any cursory Google Search will tell you, have taken dozens of photos of macabre encounters and spooky apparitions as they brave the Fort’s interior.

Mudd was a tobacco farmer and a physician from Southern Maryland. He was a friend, or at least an acquaintance of John Wilkes Booth.

Let’s go back to that night at Ford Theater. John shouts: “sic sempre tyrannis,” shots Lincoln in the back of the head and leaps of the Presidential balcony unto the theater below. Booth lands on his leg, his bones crack from the impact and he ends up limping out of the theater with just about everyone plus their grandmother chasing his behind.

Booth, with a fractured leg, can’t really escape, so along with his co-conspirator David Herold they make their way to Mudd’s home on the morning of April the 15th… less than 4 hours after the assassination. Mudd sets his leg, fixes the fracture, performs surgery, and doesn’t report to the authorities that Presidential assassin John Wilkes Booth is sitting in his dinner table with a broken leg. 24 hours pass, by now Booth is long gone when he finally makes the report.

“Didn’t know something had happened to the President,” Mudd goes. The authorities, particularly a military commission look at the evidence and say, “bull.” Mudd is found guilty and sentenced to life imprisonment… he escapes teh death penalty by a single vote.

The military decides to send the knave to hell… otherwise known as the Dry Tortugas. Mudd is placed in a prison with the following carved onto its gates: “Whoso entereth here leaveth all hope behind” (from Canto III of Dante’s Inferno).

Two years into his sentence, havoc, and pandemonium. Like flies, everyone starts a droppin’. One, two, three, twenty. An epidemic of Yellow Fever is running rampant in Fort Jefferson; gobbling down men like a kid with a bag of M&ms. The military is tossing dead bodies into the sea and one of the first corpses to hit the surf in Joseph Sim Smith, otherwise known as the Fort’s surgeon and physician. As far as clusterf&%ks go this one was a doozy. The soldiers and the prisoners are running around like chickens without a head.

Mudd leaps into action, he organizes the men and employes Arnold and Spangler – two of his co-conspirators – as nurses. He stems the spread of the disease and saved everyone’s rear from the devil’s pitchfork.

The soldiers impressed by Mudd wrote a petition to Johnson in October 1867.

“He inspired the hopeless with courage and by his constant presence in the midst of danger and infection…. [Many] doubtless owe their lives to the care and treatment they received at his hands.

Mudd, Arnold, and Spangler were pardoned by President Andrew Johnson and released.