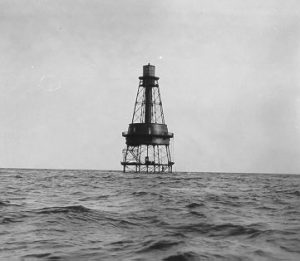 “That’s a cork swaying in the water…”

“That too, but also a lighthouse. Speaking of corks…”

When as a whole, we imagine a lighthouse, we picture a throwback from a Windows Screen-saver. A beautiful, quaint phallic construct overlooking azure surf, maybe a seagull or two overhead… Alan Jackson on a schooner strumming his guitar singing “It’s Five o’Clock somewhere…”

Not the sort of building that demands an immediate tetanus shot if you stare at it too much.

Well, that what the Carysfort Reef Lighthouse.. or light… is. A rusted out, partly bobbing abomination that might as well serve as a beacon for likes of creatures that prance around in a Lovecraft novel. It’s ugly, it’s functional, and, since you’re reading about it on a blog about ghosts, it’s iron bone-weary structure is filled up with all manner of odd rascality.

Carysfort Reef Lighthouse is found roughly six nautical miles east of Key Largo, Florida. It’s incredibly inaccessible; a beacon in the middle of a shark-infested highway. The lighthouse is an iron screw-pile base with a pulpit, and a skeletal, octagonal, pyramidal spire. On top, like the devilish eye of Sauron, a bulb that can be seen from miles. The whole enchilada is painted red. It’s one of the most important maritime beacons in the state. The area riddles with reefs, sandbars and all manner of oceanic deathtraps.

The light is 100 feet above the water. Up until 2015, It was the oldest functioning lighthouse of its kind in the United States, having been completed in 1852.

The lighthouse was stabbed into that portion of the ocean because ships had a nasty habit of running aground on the Carysfort Reef. The reef, for all those wild-life enthusiasts, is a slice of snorkeling heaven found within the Florida Keys National Marine Sanctuary. Just east of Key Largo, near the John Pennekamp Coral Reef State Park – best snorkeling trips in the State, cheap too. The area is named after the ill-fated HMS Carysfort (1766), a 20-gun Royal Navy post ship that smashed hull first into the reef in 1770.

Why I’m are we going on a segway and not smacking you around with tales of phantoms and sea-monsters? Because not only is this interesting stuff, but I’m also building up the suspense… creating a mood… fanning the atmosphere… Oh, and giving great free holiday tips.

The first Carysfort Reef light was a boat named Caesar. Caesar was the proverbial snowbird, built in New York City, full of vim and vigor. While being sailed to its station, it wrecked near Key Biscayne during a storm; the sailors abandoned ship and the thing just stood there in the water warning other vessels on the hazards of the area. In the parlance of the day, the thing became a faux lighthouse; improvised, shoddy, but functioning.

Ceasar was salvaged and dragged to Carysfort Reef, becoming for 5 years not only the first erstwhile lighthouse but a tourist attraction. People, lacking an Amazon Prime Video Membership, would sail to Ceasar just to watch the sunset and feed the sharks.

Well, Ceasar, like all lighthouse/ships/funky constructions/art project installations had a keeper… Captain John Whalton. John was a strapping lad of 25 who won the appointment of commanding the Ceasar in 1825. He didn’t go down with his ship when it kissed Key Biscayne. Why? Because his ship didn’t go down. When it ran aground John and his crew jumped into the Gulf… and, yup, the water reached their hips. No blaze of glory ending for the valiant Captain. A crash and burn start to a career if there ever was one.

Nonetheless, The US saw the kid and the big guys in charge went, “why not? We need cannon fodder.”

John was given a second chance. He was appointed the Lighthouse Keeper to the Ceasar, now relocated at Carysfort Reef. In 1836, under the command of John, Carysfort Reef Lighthouse, had become a prized strategic icon in teh State’s maritime defense. Was it something John had done? Nope. The Seminoles had burned most of the coast’s lighthouse and the Carysfort Reef lighthouse became the only navigational light on the Florida shoreline between St. Augustine and Key West. The Seminoles couldn’t get to the lighthouse… so instead, they went after John.

In 1836, Capt. Whalton and four of his helpers came back from the lighthouse to Key Largo. As soon as they went ashore, they were ambushed by a battalion of Seminoles. It was a slaughter. The attack came from all sides, the Seminoles were waiting for them in the dark. Capt. Whalton and one helper were killed, and two of the other three were wounded. It was lightning fast. In and out.

4 years later, the Ceasar simply snapped like a twig. The waves, the hurricanes, the salt, damaged the structure beyond repair and it simply gave way to inertia and sunk to the bottom of the reef. Congress appropriated funds and built what after a couple of tweaks ended up being the Carysfort Reef Lighthouse.

The lighthouse, if you have the guts to brave the Gulf, the spunk to sail the sound, and, well, the time is one of Florida’s hidden Dark Tourism gems. It’s full of supernatural hanky-panky. Ectoplasmic horse-play a plenty.  The area plagued by all types of denizens of the night and supernatural specters and creatures.

People who have stayed at the lighthouse, after dark, have seen all manner of strange things. Animals on a reptile nature circling the site where the Ceasar once stood. Moans of indistinct horror piercing the night sky. Lights zooming in irregular patterns over the crashing waves. Most believe that the place is haunted by Capt. Whalton.

The Captain, wive’s tale tell still hurting from the Seminole attack and doomed to repeat it every night until he somehow manages to break the loop and be reunited with his wife.

And… a floating skeleton… I’m not joking… an actual skeleton appearing every so often scaring the bejesus out of folks. The following, straight from the horse’s mouth, the account comes from backpackerverse.

“I’m one of the guys that gets called in when a lighthouse needs maintenance. I’ve worked on many in my life, and I’m not afraid of getting a little wet. When I was asked to do some light repairs on the now dormant Carysfort, I immediately jumped on the opportunity… I was dropped off at Key Largo and took a boat six nautical miles east to the lighthouse. I didn’t expect to be there long—most of the needed repairs were minor since the lighthouse is no longer active. I got to work on the exterior. Since the lighthouse goes up about a hundred feet, I attached myself to the structure with cable wires… Most lighthouses have some form of metal or steel framing and this contracts and expands depending on the temperature. So when the Carysfort started making all kinds of racket, I just began to whistle.. ten minutes go by when I heard a large splash below me. It’s not uncommon to get larger fish and sharks visiting to catch an easy meal. But the splashing kept happening, so I thought it best to climb lower and investigate. I climbed to the base of the structure and peered below. At first, nothing seemed amiss,” Edward shook his head. Then all of the sudden I see a full bodied skeleton float by underwater. I thought I was hallucinating—maybe I had been out in the sun too long or something. I poured some water over my head, trying to clear my mental state. I felt calm, collected…but as I stood there, I saw the skeleton go by again. It was slower this time, so I could see all its details. I’m no scientist, but it looked like it was pretty old, like it had been decaying for a long time. A few scraps of clothing remained on its torso and legs. They also look dated and they reminded me of the types of simple clothes light keepers used to wear during the 1920’s. Suddenly the skeleton disappeared before my eyes. He didn’t sink—he just faded away.”

In general, lighthouses have a bizarre appeal. Like moths to a flame, we flock to their fresnel glow. Whenever there is one present or close by, we make a “day out of it” despite our children hassling us to take them somewhere else.

“Dad, yesterday it was antiquing, today a freaking lighthouse… what old-timey joy will you dazzle us tomorrow with? Apple picking? Make your own candles?”

Well, it seems that love, that attraction towards these edifices, prevails the weakness of the flesh and that pesky doorway known as the “black veil”… Cause, even after our death we seem to waltz like lemmings towards lighthouses and pester the ever-living nerves out of unsuspecting tourists and frayed old keepers who are just trying to make a decent buck.

In the United States there are 700 lighthouses littering our 95,471 of shorelines. And, Florida has 30 of those behemoths. Anyone care to make a wager as to how many of those beacons come equipped with their very own Casper? How many might as well have a gift-shop with a plush doll of the phantasmagoric entity they somehow can’t seem to get rid of?

Every lighthouse in the State of Florida has a ghost attached to its past. You name it, they have. The Jupiter Inlet Lighthouse, The Pensacola lighthouse and maritime museum, The St. Augustine Lighthouse .

Murder victims in search of the knave that did them in; lamenting souls, byproducts of a natural disaster, screaming in hurricane gust cries for someone to hear them; mysterious visitors, black shades, appearing at the gallery rail staring daggers down at tourists; lighthouse keepers from the days of yore inviting the unsuspecting to “come on in for a snack”; children’s laughter near the swing set, a tour guide telling folks, “a bout’ of yellow fever went and did the lighthouse custodians 6 children. The man went bonkers killed himself… bodies of the kids have never been found.”

Lighthouse have it all!

Dozens of Fringe scientists have speculated on the reasons behind this supernatural phenomenon… and… frankly, they are stumped. The reality, less bone-chilling but true nonetheless: lighthouses as a whole are fascinating, they are reminiscent of another time, of a more romantic epoch; one littered with pirates, sailors, star-crossed lovers, tragic tales, and nostalgic daydreams. We need the excitement they instill and the emotions they seem to flutter in our hearts… we need them to be gothic, exotic, and magical… and we need them to have a ghost; whether it’s one with documented “proof” or one we simply conjured up from the ether of our imagination just to add a bit more spice to the whole experience.