Captain Tony, The Legend, The Life of Key West

HOME » BLOG » HAUNTED STORIES » CAPTAIN TONY, THE LEGEND, THE LIFE OF KEY WEST
Posted by blogger in Southern Most Ghosts 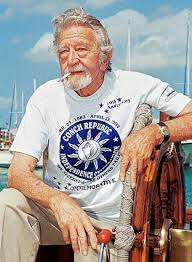 Tony Tarracino, (August 10, 1916 – November 1, 2008) more commonly called Captain Tony was a legend. PERIOD. Let’s end the article there. As an addendum just place the word EPIC whenever you say his name. In other words, he was an epic legend… But you want to know more, right? Well, read on. By the time I’m done you’re going to be scratching your noggin’, asking yourself: “a Netflix special about a perm sporting weirdo with a tiger fetish, and not one about this rad’ dude? Hollywood, get off your derrière and get cracking.”

Captain Tony’s biography reads like a Carl Hiassen novel with a dash of Mario Puzzo and a twist of Hunter S. Thompson. He was a saloonkeeper, a boat captain, a mobster, a politician, a gambler, a lothario, a storyteller, a smuggler, and those are just the labels and portmanteaus we know of.

“Arguably the city’s most beloved resident” and “the conscience of Key West.”

Anthony Tarracino was born in Elizabeth, New Jersey. His father was a bootlegger. In ninth grade, Tony decided to inspire a future Martin Scorcese; he dropped out and started selling whiskey… during Prohibition. While selling booze, not only the one his father brought from Cuba but bathtub gin, Tony rubbed shoulders with every lowlife New York had to offer. The kid liked THE life.

The big turning point in Tony’s life came when he switched careers and became a gambler. During his twenties, Tony started betting on absolutely everything. Horses. Table poker. Boxing. Kid’s events. Just about everything. During this time he got involved with the New Jersey Mafia. One day, Tony went and screwed the pooch. He broke the golden rule; never try to con the mafia. Tony woke up not with a horse’s head in his bed, but next to a trash bag. Next to thousands of trash bags to be exact. He had been beaten and left for dead at the Newark city dump. Staggering out, bloody and counting his lucky stars, Tony did what any rational man in those dire straits would have done, he moved out of town. He moved so out of town that he practically left the United States. Tony moved to a frontier’s land of cutthroats, umbrella drinks, poets, and wackos… Tony went to Key West.

In 1982, he told the tale of his harrowing mafia faux pass. Cue the Entertainer, cause his story either copied from the Sting or inspired that Paul Newman classic. Tony, in so many words, cheated the New Jersey outfit – by using the telephone to get early race results. He made a bundle and was the first to exploit that loophole and try to pull the wool over the mob.

Tony made a splash in early Key West society. Back then, the place was brimming with roguish figures, desperados, oddballs, the round squares in a round hole society that wanted to live in a Jackson Pollock tilt-a-whirl neighborhood; no Stepford wives. The Keys were barely hanging on the norms/laws placed by the US government. If you were running from something, running towards something, or just needed a little napalm in your breakfast to feel alive, you went to the Keys. You had writers penning great works besides the last generation of pirates the Caribbean would make. Drunk Senators and Congressmen making backroom deals with Cuban rebels and Meyer Lanski. Spooks and spies looking out to the south and viewing the shark fin that would eventually surface as Communism breaking the surface of the Gulf and either chumming the waters or taking potshots at it.

Into that melting pot of loco banana fell a man a couple of narcotics short of sanity and a spirit that couldn’t be tamed. Tony first became a shrimper, the, a charter boat captain, and – in a natural Floridian progression – he progressed to running guns.

Everywhere you turned, back then, the world was a flamed, and one of the biggest hotspots was the Caribbean. Tony didn’t douse those burning embers, he fanned them and hope he wouldn’t get burned. He started trafficking things that went BOOM and BANG for anyone with the scratch to afford them. Rebels with a lust for “Viva la Resistencia!” got themselves some groovy rifles. Government of the book operatives, 9mm with serials filed off. Banana Republic despots dodging sniper fire from well-armed “where did they get those toys?” rebels and hitting the deck when a truck backfired cause “the Americanos put a hit on me” they too got into Tony’s cookie jar.

The man became a hit and by 1961, thanks to Fidel and his lackeys, he had enough dead presidents hidden under his mattress to reinvent himself one more time.

Oh, and those pesky mobsters from The Garden State? They caught up to Tony… and became business partners with the tropical shirt-wearing Han Solo. No carbonite for that desperado.

In 1961, Tarracino became the proprietor of Captain Tony’s Saloon at 428 Greene Street in Key West. The marque tore it down said: Sloppy Joe. Tony not only wanted an investment for his ill-gotten dough but a place to hang out and practice his passion – we’ll get to that in a second. In his mind, what better place than the joint Ernest Hemingway frequented.

When you go to Key West, and if you haven’t then you’re a fool and should really reevaluate your life choices, you’re going to walk – I hope drunkenly – down Duval Street and marvel at the spectacle that is Sloppy Joe. Right on the corner of Greene and Duval, Papa Hemingway’s mug starring down with a grin from just about every fixture there is. Snazzy, bright, full of panache. Well, here’s the scoop… IT’S A SHAM. Glitz and glamor and full of empty promises. The place where the wordsmith downed his daiquiris and punched his liver is a couple of meters down south of Greene. It’s called Captain Tony and it was bought dirt cheap.

Captain Tony Goes to the Ballots

So, gambler, bootlegger, gunrunner, saloon proprietor, mafia BFF… yup, you guessed it, next logical step… Politician. Tony’s life had been a hard knock’s course on the intricacies of government work. In 1989, Captain Tony, a man whose most famous quote is:

“All you need in this life is a tremendous sex drive and a great ego, brains don’t mean s***.”

Won the office of Key West mayor with 32 votes out of more than 6000 cast. The man’s sole campaign promise: let the loonies in. His campaign was managed and finances by Jimmy Buffet; a dear friend of Tony and a man who wholeheartedly believes in the axiom of “keep the Keys weird.”

“What I want to do is limit Key West’s growth and to keep its reputation as a refuge for eccentrics and renegades who had found their way to the southernmost point of the continental United States.”

In 1991, he lost the bid for re-election to Dennis Wardlow. Wardlow had one up Tony’s insanity – an article for another time – by going to war with the United States navy with stale Cuban bread and becoming the “prime minister” of the secessionist Conch Republic. It was a tight race and one that was won not on the premise of “who looks like he’s taking his meds”, but on the fact that Wardlow’s campaign promise if he won was to “jet ski naked to Cuba to support our brothers trapped in that island.” Tony lost the campaign, but like a good sport, I imagine,  he was there to smack pale old man cheeks as they flew into the sunset and made it halfway to the Dry Tortuga’s

When Tony wasn’t trying to bed politicians, seduce mobsters, or sweet talk a CIA spooks, he was cranking his charm to eleven and bedding anything that moved and happened to stroll into his saloon. That was his passion and partly teh cause of his investment in the famous Key West watering-hole.

Tony had several wives and was married to his fourth, Marty, for more than 38 years at the time of his death. They had an open-minded relationship. He jettisoned from his loins into the world 13 children – at least 13 he knows of – including former Survivor contestant Keith Famie. Like Keith Jagger, the last one his member baked into the ether, came when he was 70.

Tony sold his bar but managed to swindle into the fine print that he could drink at the place for free until he croaked. He was raconteur and storyteller and up until he made off like a bandit into the great beyond, he was a fixture – a piece of living history – of the tapestry that was Key West.

Tarracino was the author of Life Lessons of a Legend with Brad Manard. At the time of his death, Wendy Tucker, a former Miami Herald reporter was ghostwriting his autobiography, The Breaks.

In 1980, Captain Tony was portrayed by Stuart Whitman in Cuba Crossing. The movie, supposedly based on one of Tony’s adventures and how he was caught up in a plot to kill Fidel Castro.

“I went to Captain Tony’s, to get out of the heat, I heard a voice call out to me, ‘son come have a seat.’”